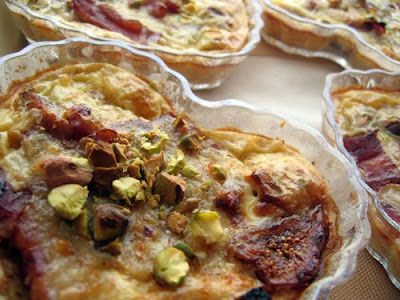 My days seem way too short for what I want to do. Not much of a surprise since it's like that since... oh well, since always! But lately I just can't find enough time for all that requires my attention: family, friends, students, co-workers. And then there's the tennis - my other addiction. It's not everyday the n.1 player in the world (aka The Mighty Federer) does his way to play at my 'backyard'. So I went to Estoril, got soaked (several times) and had a sunburned nose by the end of the week... How cool is that? All for the price of one! The good thing is I got to spend time with friends I don't usually see, chitchat for hours, shot tons of pictures - oh I LOVE outdoors! - and in the end my favourite won!

Soak dried figs in wine for at least 1 hour to hydrate.

In a non-stick saucepan, cook bacon with a little water until golden. Add dried figs and sliced red onion, mixing to combine. Allow to cook for 2 minutes. Pour in the wine. When resumed, remove from heat. Set aside.

In a medium bowl, whisk together the eggs with the grated Parmesan. Pour in the milk, and whisk until combined. Add in the flour, mixing continuously. Season with pepper and a pinch of salt (depending on how salty the bacon is). Place the bacon mixture evenly into 6 individual greased heatproof plates. Pour the bater on top. Sprinkle with chopped pistachios. Bake for 20 minutes or until cooked through. Serve immediately, with a rocket salad. 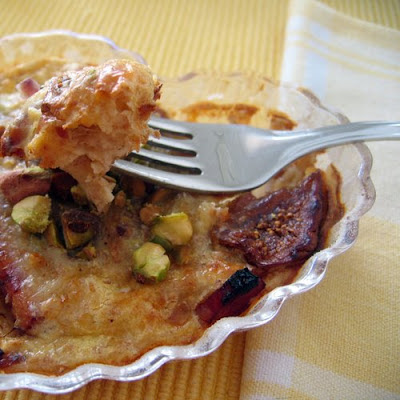 
Check the great roundup at Bron's and vote for your favourite!
Posted by Suzana at 09:22

Suzana, that is genius! I would love to sink my teeth into a bacon and fig clafoutis. Wonderful!

Those look wonderful and I love the heart shaped dishes you have!

Yummy figs, we bought a few not too long ago, unfortunately they weren't very sweet :(. Your dish sounds scrumptious.

You've also been awarded the 'E' from me.

What a beautiful clafoutis!

Bacon and fig?!? Wow, what an interesting combo! i am sure they tasted delicious!

The combination of bacon and fig is brilliant! They look beautiful!

now thats a very unusual combination.
your dishes are so adorable.

Suzana this is one fantastic Clafoutis! I'm really looking forward to trying this one as it my hubby!

Great combination. I'd never have thought of putting bacon and figs together.

I love bacon and prunes together but would never have thought of pairing bacon and figs. Sounds delicious. Congratulations!

This is a Flickr badge showing public photos and videos from Home Gourmets. Make your own badge here.

This work is licensed under a Creative Commons Attribution-Noncommercial-Share Alike 3.0 Unported License.